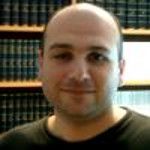 His scientific interests have gradually shifted from the topic of non-linear dynamical systems to the field of extreme mass ratio inspirals and gravitational waves. He focuses mainly on the orbital dynamics in curved spacetimes, e.g., geodesics and particles with spin. A secondary field he pursues is dynamical studies of cosmological models.